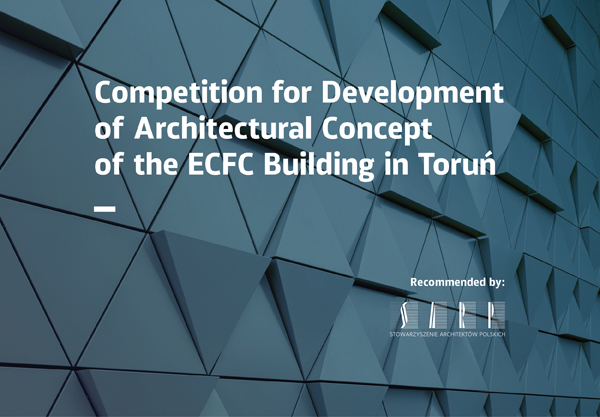 On Sunday, February 28, the European Film Center CAMERIMAGE (ECFC) and the Association of Polish Architects (SARP) announced an international competition for architectural concept of the European Film Center CAMERIMAGE building in Toruń. The construction of the ECFC seat, scheduled for 2021-2025, is the second largest – after the Polish History Museum – construction investment project in the field of culture in Poland. The cost of construction is PLN 600 million, of which PLN 400 million is to come from central government funds provided for in the Long-term Development Program, and PLN 200 million from the budget of the City of Toruń.

The competition organizer – the European Film Center CAMERIMAGE – is a state cultural institution established at the beginning of 2020 on the basis of an agreement signed on September 29, 2019 by the Ministry of Culture and National Heritage, the City of Toruń and the Tumult Foundation for its joint creation and cooperating. The institution's goal is to build a permanent seat of the EnergaCAMERIMAGE International Film Festival in Toruń. In addition to this investment task, ECFC is to conduct substantive activities as part of the annual co-organization of the Festival, as well as other exhibition, cultural, educational and scientific projects in the field of Polish and world audiovisual culture. The organizers of the festival hope that the construction of its permanent seat will fill the gap that exists in the Polish cultural infrastructure and will allow it to fully spread the wings of this largest international film event in Poland. It will also be a space for organizing projects of various environments, which will find here logistic facilities and the best conditions for conducting events for their target group, residents of the country and the region.

ECFC has very ambitious plans to build a year-round program, which will be prepared based on cooperation with, among others, guests of the EnergaCAMERIMAGE festival. ECFC partners invited to cooperate will include European and American Film Academy and film associations from Poland and abroad, archives and cultural centers, as well as galleries from around the world. In addition, the spaces of the ECFC will be available for commercial rental for the organization of large events in various fields of art, science and business, eg. conventions and symposia for several thousand people. They will complement the logistic and organizational offer for those events and institutions that will be able to host or carry out their events in Toruń. The joint synergy effect of the European Film Center CAMERIMAGE, the Center of Contemporary Art and the Jordanki Cultural and Congress Center located next to each other will bring the city and its residents a new quality of cultural, educational and entertainment activities throughout the year.

The subject of the competition announced on the last day of February is the architectural concept of the ECFC seat in Toruń along with the development of the area. The organizers expect designers to present a modern, extraordinary object, fully reflecting in its architectural expression the unfettered imagination of the authors, just as the art of film can be unpredictable and authentic. The building and its development should meet the expectations of users with a highly developed sense of aesthetics.

The organizers hope that the largest architectural studios in the world will take part in this design competition which is to be determined by the attractiveness of the design scope, the award and the investment value. A post-competition exhibition of submitted works is also planned to present architects' ideas to a wide audience.

The new ECFC seat will be located in the immediate vicinity of Toruń's Old Town, which is on the UNESCO World Cultural Heritage List. Therefore, the architecture of the ECFC building on the one hand should be innovative and original in form, and on the other hand, it must take into account all historical aspects of Toruń's attractive Old Town. The presence of the ECFC seat should also complement and develop creatively the existing structure of this part of the city.

The competition is conducted in a limited, two-stage competition procedure and is addressed to the international community of architects. Its result is planned to be announced in the end of July 2021. The submitted works will be assessed by a competition jury composed of representatives of the Association of Polish Architects, the Ministry of Culture and National Heritage, the Municipality of Toruń, the Marshal's Office of the Kujawsko-Pomorskie Voivodeship and the Tumult Foundation, the organizer of the Camerimage Festival. The chairman of the jury is Bolesław Stelmach, Phd, an outstanding Polish architect, director of the National Institute of Architecture and Town Planning, winner of the 2010 Honorary Award of the Association of Polish Architects.